First, let me get the obvious out of the way: Despite its name mine is not blue. But trust me that doesn’t affect the flight performance at all. ;-)

The model was originally produced and sold by a Swedish company called “Hobbyträ”. The company apparently went bankrupt a couple of years ago. It was sold as a pure glider with no motor. Later “Der himmlische Höllein” offered the kit and included instructions how to electrify the model. This is most likely the version I now have. Unfortunately Höllein is also stopped selling it by now.

The Blue Phoenix might be the most boring plane you can imagine. Its gliding angle is phenomenal and you can make it super slow without stalling it. It’s simply the perfect companion for an relaxed evening. But be sure to bring a chair. On a good day with my current setup flight times around one hour are a given. It is actually so good at picking up thermals that it can get difficult to bring it back down and not let it rise beyond visibility. Here its one drawback becomes important. It is not designed to be flown fast.

The last point is also the reason why I will add in spoilers to allow for easy and safe descent even in strong thermals. Otherwise no further modifications are planned. Because of its age (just slightly younger than myself) the model has been through many cycles of flying, crashing and repair. Still the flight performance didn’t degrade. And being made out of balsa wood repairs are easy to do and missing or broken parts can be re-cut by hand. The only visible artefact of the many years of service is the glass fiber re-enforced nose. Just gives a better feeling if something more then epoxy is holding all the bits and pieces together. :D

After the first few flights I noticed the motor brake of the ESC is to weak to stop the propeller. I might need to swap the ESC for a different one.

If you still have the original plan for the “Blue Phoenix” I’m very much interested in getting access to it. The one I have has worn out over time and it’s becoming increasingly difficult to get accurate measurement from it. So please get in touch 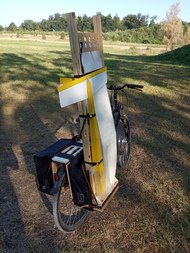